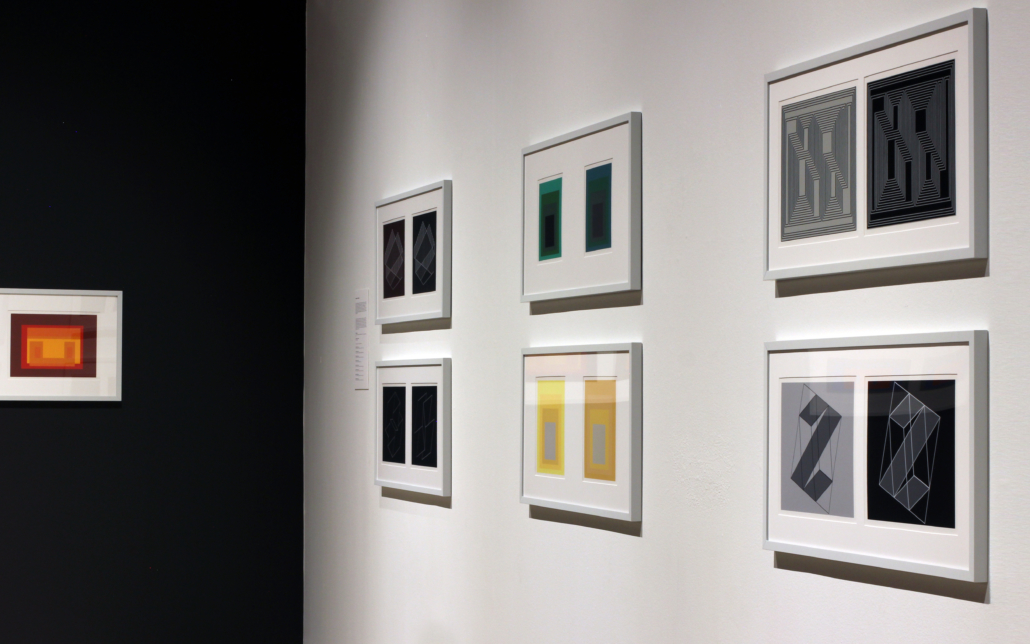 Josef Albers (German, 1888 – 1976) was a prolific printmaker, painter, and educator. His most well-known works on paper include Homage to the Square, Formulation: Articulation, and Interaction of Color. Completed in 1972, Formulation: Articulation is series of silkscreen prints published by Harry N. Abrams and printed by the well-known fine art printing firm Ives-Sillman.

Josef Albers is one of the most influential artists of the 20th century and considered an essential figure of the Bauhaus movement, which focused on the modern integration of architecture, fine art, and craft. Joining the German art school in 1920, Albers met his future wife and fellow student, Anni Fleischman, an important artist in her own right. Together, they collaborated on many projects at the Bauhaus, and served as masters of the school in Dessau, Germany, until occupation by the National Socialist German Workers’ Party (Nazi Party) in 1931.

Josef and Anni Albers emigrated to the United States in 1933, following an invitation from famed architect, Philip Johnson. A well-respected professor of art both in Europe and the United States, Albers served as head of the Art Department of Black Mountain College in North Carolina, and Department of Design at Yale University. Many of his students became famous artists, including Robert Rauschenberg, Cy Twombly, Richard Anuszkiewicz, Eva Hesse, and John Chamberlain.

The exhibition is on view in the Lois C. Green Gallery.

Generous support of the 95th Anniversary exhibition season at the Tucson Museum of Art is provided by the Connie Hillman Family Foundation, Jim and Louise Glasser, Jon and Linda Ender, and AC Hotel Tucson Downtown.

Become a TMA Member and
Explore, Experience, and Connect