Dance Meets Visual Art in the Work of Nik Krevitsky

It’s International Dance Day! This global celebration of dance takes place every year on April 29, the anniversary of the birthday of Jean-Georges Noverre (1727–1810), the creator of modern ballet. Today we celebrate dance by exploring its impact on the work of Tucson artist Nathan “Nik” Krevitsky (1914-1991).

Krevitsky studied with the Chicago Repertory Theater and by 1940 he was a distinguished dancer in the Chicago scene. He was invited to join the faculty of Vermont’s Bennington School of the Arts in June 1941, teaching in the renowned dance program founded and headed by Martha Graham.

A year later Krevitsky began wartime service in the U.S. Army, where his duties included designing posters and stage sets, and even painting a portrait of a commanding general. He used any down time to sketch, becoming fast and prolific. In June of 1944, while stationed in southwest Missouri, Krevitsky was given the first solo exhibition in the history of Camp Crowder. The show included 60 watercolors, ink and crayon sketches and drawings.

Three months later, discharged from the Army, Krevitsky returned to Chicago and held his first solo exhibition there. By the late 1940s he was living and working in New York and became part of the New York School.

Krevitsky’s visual style was inspired by the movement of dance, particularly Modern dance. The focus on movement and gestural form placed his work within the new Post WWII Abstract Expressionism. Throughout the 1950s he developed his expressionistic forms while growing increasingly interested in the role of craft as a fine art, serving on MoMA’s Education committee and earning a PhD from Columbia University.

While working as assistant professor of Art at UCLA and San Francisco State College, Krevitsky developed an Abstract Expressionist fiber arts practice he called Stitchery. Focusing on process, he leveraged the gestures of modern dance, layering fabric and thread in organic, energetic works.

In 1960 Krevitsky moved to Tucson, having been named as the art director for Tucson Public Schools. He exhibited drawings, paintings, enamels and his signature abstract, transparent works of stitched and appliqued fabric in more than fifty solo exhibitions across the country in the 1960s and 1970s. In 1969, his work was included with many notable craft artists in the pivotal exhibition Objects: USA at the Smithsonian Institution.

He was actively involved in the Tucson and Arizona arts communities, and held official positions in the Tucson Craft Guild, the Arizona Designer Craftsman, and the Arizona Art Educators Association in addition to numerous national positions. He authored several art books including Batik Art and Craft (1964), Stitchery: Art and Craft (1966), and Shaped Weaving (1974). 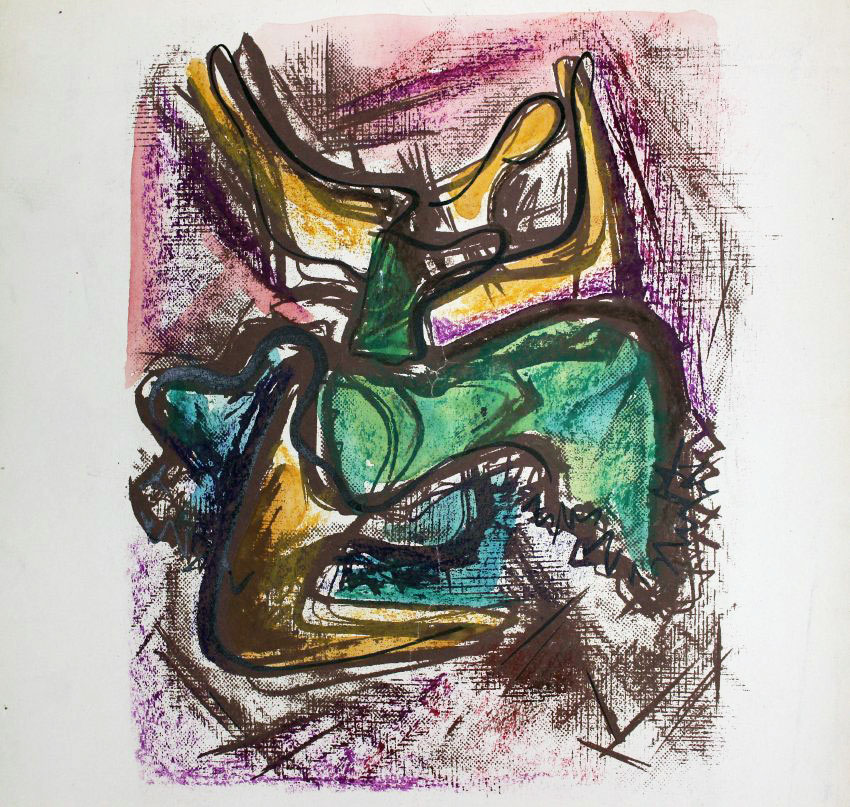 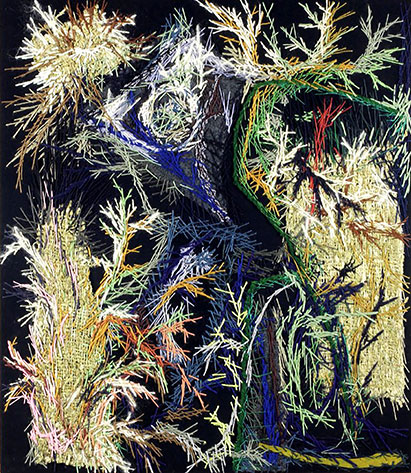 This abstract thread “painting” is characteristic of Krevitsky’s work in the 1960s. With its multiplicity of thread colors dispersed in all directions, it exudes a sense of spontaneous excitement, crackling with energy. The blue figure in the center seems to be engaged in ritualistic movement. The ominous black background acts as a sharp contrast to the bright thread colors, which appear to jump off the canvas as they take on an almost three-dimensional quality.