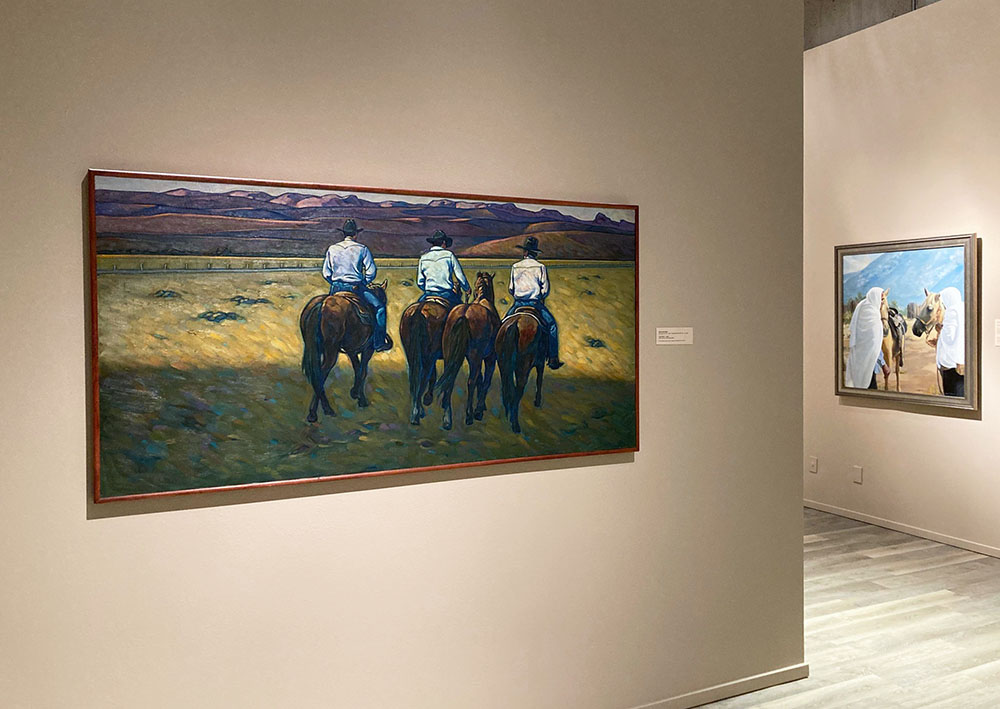 Howard Post, Late Ride, ca. 1990, oil on canvas, 37 X 73 in. Collection of the Tucson Museum of Art. Gift of Louise R. Glasser. Currently on view in the Frank and Jean Hamilton Gallery.

The Bull Pen (1978) by Howard Post has been a visitor favorite at TMA since it was acquired in 2000, and Three Crossing (2013) is a relatively recent work by Post that was acquired in 2014. This spring the museum was fortunate to receive a third Post painting as a gift from Louise R. Glasser. Late Ride, which the artist dates to circa 1990, demonstrates his stylistic tendencies of this period, using bright and pastel colors, impressionistic brushwork and a larger canvas size. The painting is now on view in the Frank and Jean Hamilton Gallery on the lower level of the museum.

Howard Post, who lives in Tucson, has significantly contributed to the Art of the American West through his innovative depictions of the people and land he knows best, starting in the late twentieth century and continuing today. He focuses on what appeals to him: unique patterns, light, shadows and shapes found in Western landscapes, on ranches and at the rodeo. He strikes a balance between conveying abstract and representational forms while using thought-provoking color combinations.

Born in 1948 in Tucson, Arizona, Post knew the life of a rancher and cowboy from an early age—his family kept rodeo horses and cattle just outside of town. He is also a rodeo champion and continues to compete. He obtained Bachelor and Master’s degrees from the University of Arizona, and taught art there for two years. Post worked as a commercial artist until 1980, when he decided to devote himself to a painting career depicting Arizona’s ranch traditions. His work is defined by strong shadow patterns cast by the figures of horses, cattle, cowboys, trees or fences.

Cookies with a Curator: Dennis Ziemienski
Scroll to top