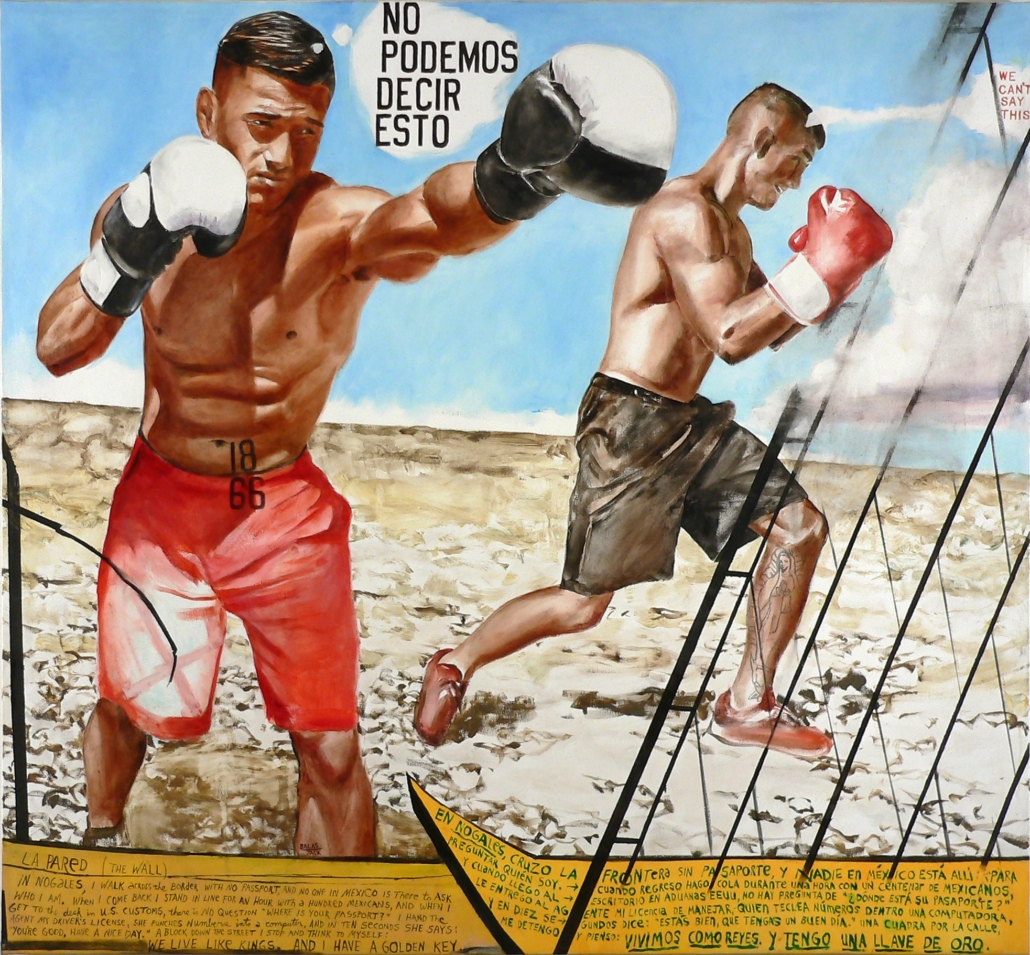 La Pared, Nogales (The Wall), acquired earlier this year for TMA’s permanent collection thanks to a gift from the artist, is a painting about the day artist Jack Balas walked across the border in Nogales without a passport. As a white man, he was not stopped or questioned about his identity or nationality, a reinforcement of white privilege and profiling that so often occurs in border patrol checks.

Balas’s intention in his body of work is to build bridges between images and ideas, like a map that is open to interpretation. Many of his works are derived from personal photographs and include annotated words or stories to connect the viewer on an emotional level through metaphor. In all of his works, his curiosity, wry humor and unique perspective on the world are refreshingly apparent.

Born in Chicago in 1955, Balas began painting watercolor landscapes in high school. He enrolled at the Illinois Institute of Technology to study architecture and design, but wound up with a graduate degree in sculpture from Northern Illinois University. He then moved to Los Angeles and resumed painting.

Balas was hired by an art-shipping company. He spent five years driving a month-on, month-off route between San Francisco, Los Angeles, Santa Fe, Chicago and New York, transporting art between artists, galleries, museums and collectors. As he traveled he photographed and wrote about the places he was driving through. This travel influenced subsequent paintings that the artist calls maps or diaries, including an artwork titled Rumor in TMA’s permanent collection.

In these works Balas expresses an interest in linking a broad territory of the visual and the verbal, the conceptual and the material, the viewer and history, fact and fiction, and abstraction and representation. His intention is to build bridges between images and ideas, like a map that is open to interpretation. Rumor was inspired by a trip to the Grand Canyon where Balas became more interested in his fellow tourists than the sublime landscape in front of him. He was moved by “a parade of humanity who was, perhaps for the first time, considering the grand evidence of our mortality.” Above the cloud formations float random names from the phone book, which connects a multitude of people with the icon we all acknowledge, whether we have visited the canyon or not.

In 2003-04 Balas taught painting and figure drawing as a visiting assistant professor in the School of Art at the University of Arizona in Tucson. These days he divides his time between Colorado and Arizona.

The male figure dominates much of his recent work. “My goal is to present them as everyman,” Balas says of these men, “reaching beyond the fleeting surface idealization associated with youth and hopefully going far in terms of metaphor, poking around such timeless ideas as: truth, beauty, faith, time, the infinite, what we learn and what we know.”

He continues: “I put them out there too to counter the prejudice many in the world have felt for centuries in favor of female beauty, still ubiquitous on all fronts in our daily lives. Almost always metaphoric in nature, I want my guys to go beyond objects of desire, to straddle the brawn vs. brains divide and do some heavy mental lifting at the same time that they muscle up.”

The Neon Works of Patrick Martinez
Scroll to top