The Neon Works of Patrick Martinez 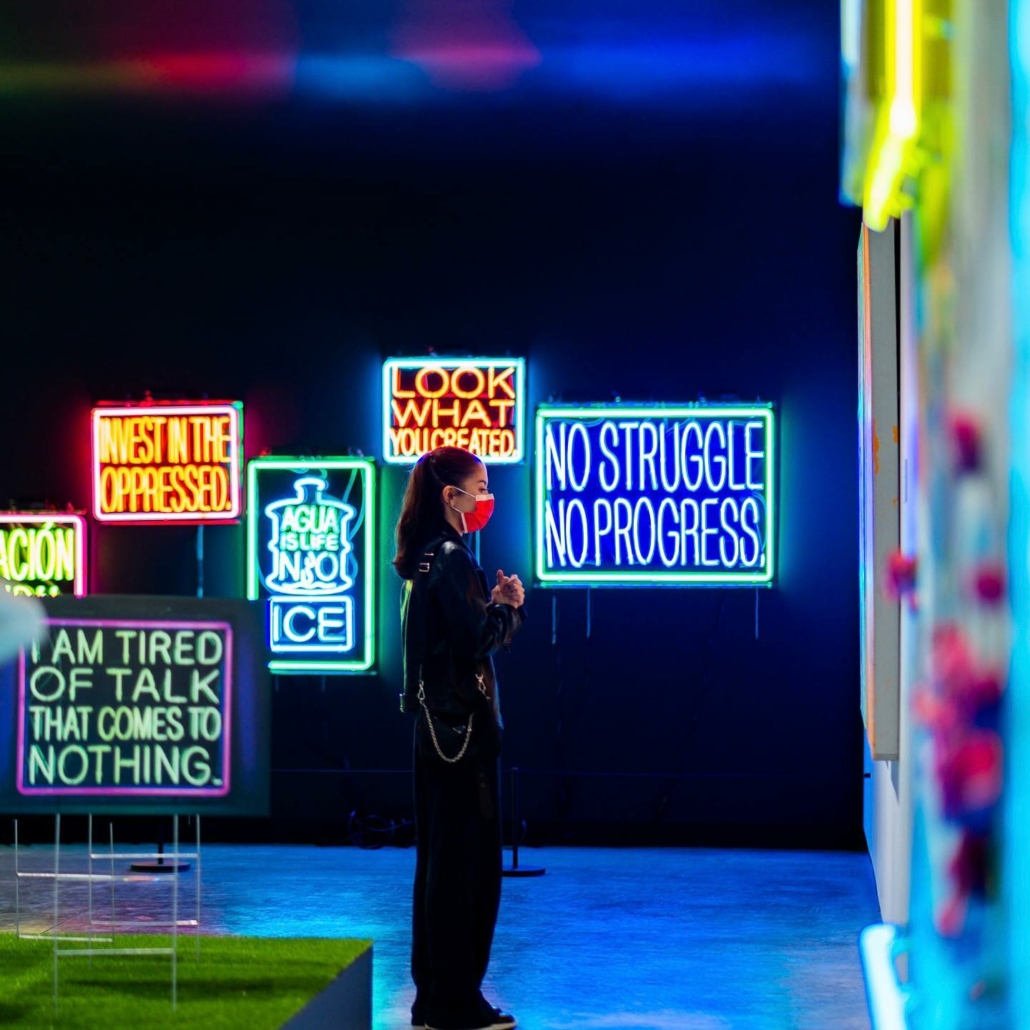 A TMA visitor at the opening celebration for Patrick Martinez: Look What You Created. Photo by Julius Schlosburg.

In October 2021, Charlie James Gallery announced the acquisition of ten of Patrick Martinez’s neon pieces by the Whitney Museum in New York City. The timing could not have been better for residents of Southern Arizona. Just two weeks after the announcement brought national attention to Martinez’s work in this medium, TMA opened Patrick Martinez: Look What You Created, an exhibition in which his neons feature prominently.

Neon signs are a common sight in Martinez’s neighborhood in Los Angeles. Instead of designating strip malls or pawn shops, Martinez’s neons are a form of political expression. They make urgent statements that draw the viewer’s attention to current issues of displacement, discrimination and socio-economic inequalities. 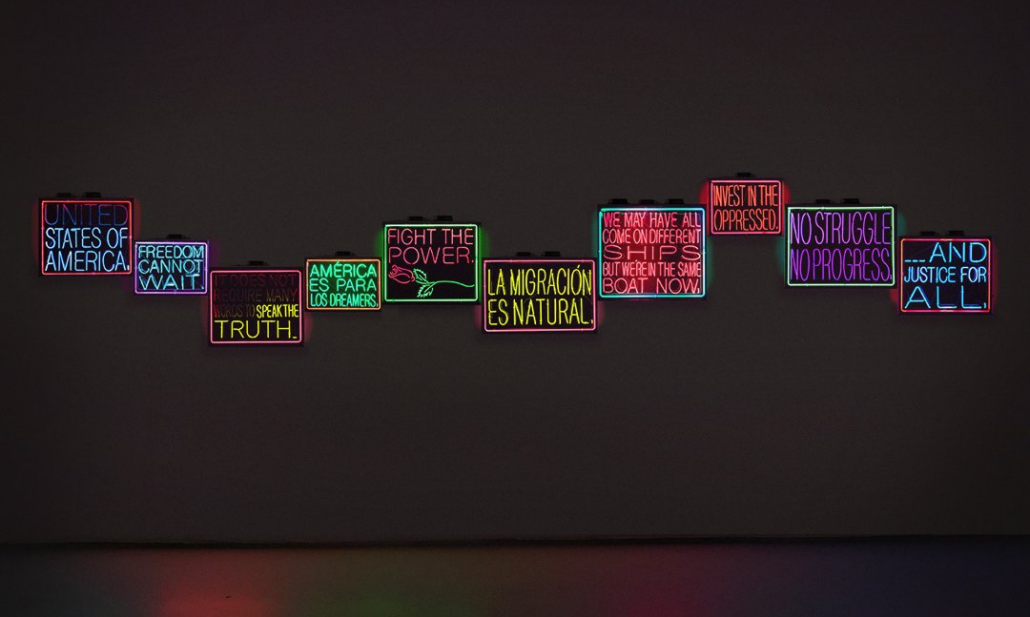 TMA’s exhibition includes six neon signs. It also includes a suite of five mass-produced lawn signs that depict some of the artist’s other neons, arranged in a bed of artificial turf. They mimic the digitally-printed Coroplast signs used in political campaigning. While this representative set is displayed in the museum space, most of Martinez’s lawn signs can be found out in the world with their metal feet stuck in real lawns and yards around Los Angeles.

Martinez was the first artist to participate in Signs for Change, a city-wide public art-initiative organized by the nonprofit LAND (Los Angeles Nomadic Division). The project reconsiders the power and influence of symbols, signs, and messages. Martinez designed a sign featuring a quote from Henry David Thoreau’s essay, “On The Duty of Civil Disobedience” (not included in TMA’s exhibition), and it was mass produced in an open edition and made available for sale on LAND’s website. Fifty percent of the proceeds of Signs for Change are shared with a community-based organization of the artist’s choosing: in this case, Border Kindness, which provides food, medical care and other emergency services to asylum-seekers returned to Mexico.

While Martinez’s neons and yard signs are visually striking and their messages arresting, knowing the sources of the text that is spelled out in glowing neon-filled tubes can give museum visitors a deeper level of understanding. Each piece showcases the words of past American leaders responding to social issues. Although they were spoken or written decades or centuries ago, they remain painfully relevant today. 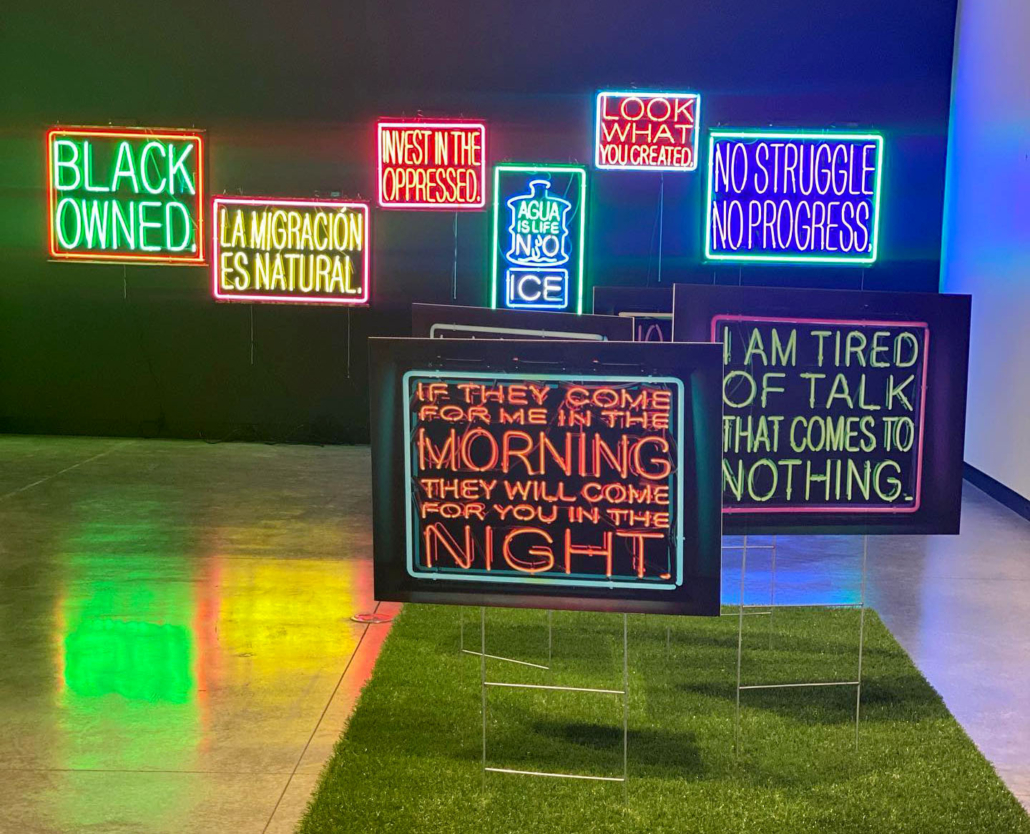 Installation view of Patrick Martinez: Look What You Created in the Kasser Family Wing of Latin American Art at Tucson Museum of Art. November 2021.

The suite of five lawn signs includes the following pieces:

“If They Come For Me In The Morning They Will Come For You In The Night”
This statement is adapted from a 1970 letter written by James Baldwin, a Black novelist, playwright, essayist and activist, to scholar and human rights activist Angela Davis, who was being prosecuted for three capital felonies (she was acquitted of all charges in 1972).

“People Give Up Their Power By Thinking They Don’t Have Any”
These are the words of the Black writer and activist Alice Walker, who is most famous for her 1982 Pulitzer Prize-winning novel The Color Purple.

“No Struggle No Progress”
These words paraphrase the most-quoted sentences of Frederick Douglass. On August 3, 1857, Douglass delivered a “West India Emancipation” speech at Canandaigua, New York, on the 23rd anniversary of the event. He talked of the crucial role of the West Indian slaves in the freedom struggle. Douglass himself had escaped slavery in the American South to became an abolitionist, orator, writer and statesman.

“I Am Tired Of Talk That Comes To Nothing”
On January 14, 1879, Chief Joseph, chief of the Nez Percé of the Columbia River Plateau in the Pacific Northwest, delivered an address known as the Lincoln Hall Speech in Washington, D.C. Chief Joseph’s main message: to reduce conflict, white Americans needed to correct their misunderstandings of Indigenous people.

“Hate Is Too Great A Burden To Bear”
Excerpted from Martin Luther King Jr’s ​speech “Where do we go from here?”, delivered on August 16, 1967, at the 11th Annual Southern Christian Leadership Conference (SCLC) Convention in Atlanta, Georgia. The speech was King’s analysis of the state of American race relations and the movement after a decade of U.S. civil rights struggles. He concluded that all Americans must unite in order to fight poverty and create an equality of opportunity.

Read this excerpt from an interview with Patrick Martinez to learn more about the origins of “Look What You Created,” both the artwork and the exhibition title.