Recent Acquisition: Sacrifice of the Head and Heart by Eduardo Carrillo 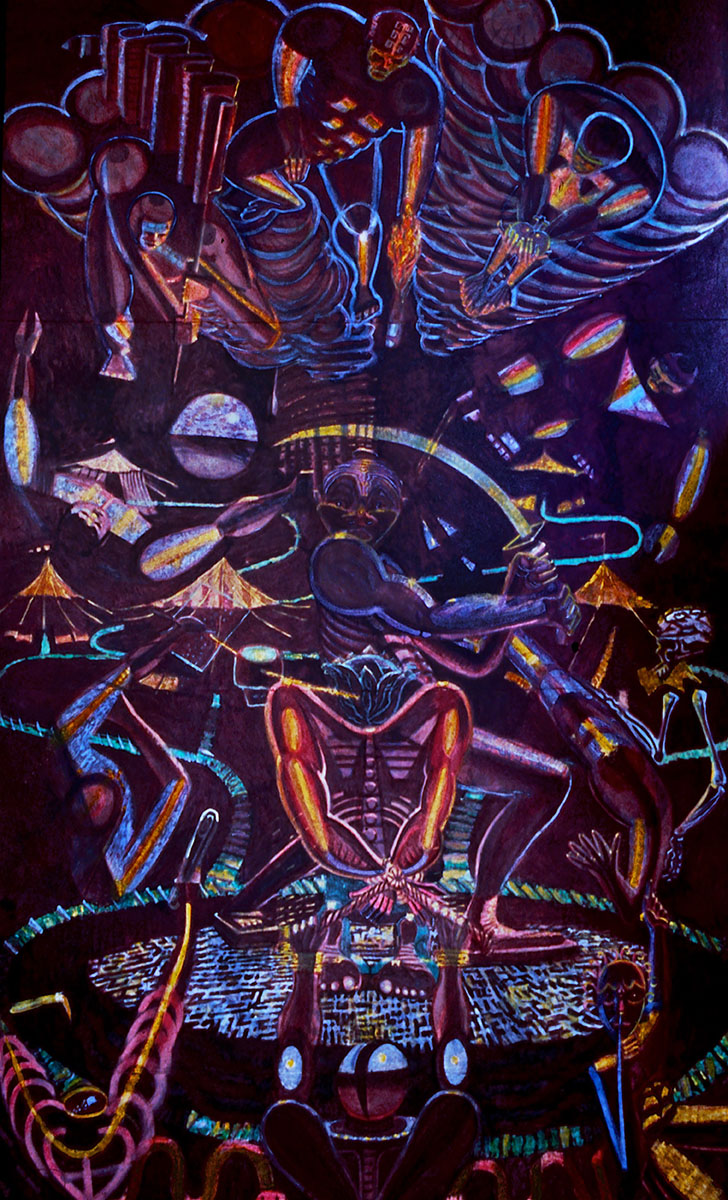 TMA has recently been honored with the gift of the monumental painting Sacrifice of the Head and Heart (1978) by the artist Eduardo Carrillo, a Mexican-American painter and longtime faculty member at the University of California Santa Cruz. Perhaps best known for his work creating large-scale compositions like the new TMA acquisition, Carrillo’s work embraces a wide universe of subjects. In some cases, Carrillo explores key moments in the history of the formation of Mexican identity, as in portraits and historical paintings of figures from the Aztec past and scenes from Colonial Mexico. In other contexts, Carrillo reinterprets the foundational stories and mythologies of the West, as when he paints scenes related to the stories of the Old Testament.

Measuring fourteen feet in height, Sacrifice of the Head and Heart offers a different vision: According to Allison Carrillo, the artist’s widow, the central figure on the painting represents Tamerlane, the conquering warrior who founded the Perso-Turkish Timurid empire at the end of the 14th century. The world that Tamerlane created was known for its patronage and celebration of the arts. Though rooted in history, much of the painting feels strikingly futuristic. The men flanking Tamerlane on all sides are painted at perspectives that suggest a dramatic recession in space so that the work pulsates with centripetal force. The painting suggests a unique take on Carrillo’s longtime interest in the relationship between universal ancient history and spiritual heritage.

Born in 1937 in Santa Monica, California to a family of artists, Eduardo Carrillo maintained a lifelong relationship to Baja California, Mexico, the birthplace of his father. There, in the city of La Paz, Carrillo’s family founded a center for artistic production to promote regional artists and craft, especially in painting and ceramics. In the 1960s and 1970s, Carrillo became influenced by the Chicano movement; a collaboration at UCLA resulted in a noted mural depicting Chicano history. Subsequent mural commissions followed. Carrillo was a dedicated instructor at UC Santa Cruz for over 25 years, teaching painting and drawing to generations of students while further developing his artistic practice.

Carrillo’s work is included in a number of institutional collections, including those of Crocker Art Museum, Corpus Christi Museum, Oakland Museum of Art, Monterey Museum of Art and the Mexican Museum (San Francisco, CA).

Carrillo wrote, “I have always felt an enrichment of the spirit through the practice of painting.” TMA is fortunate to add the work of this capacious artist to the permanent collection.

A Fresh Approach to Art of the American West

Artworks From the TMA Collection Link Northern Mexico and the U.S. Southwest...
Scroll to top