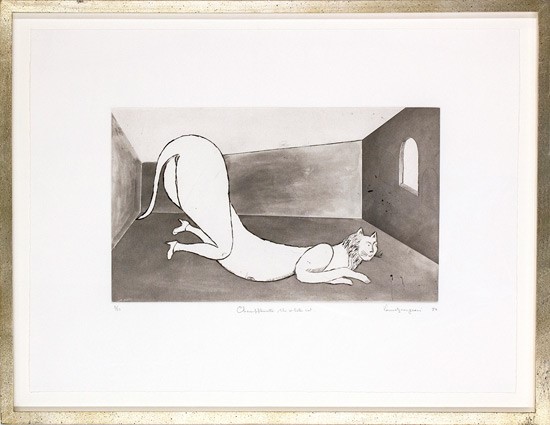 TMA now holds three new works by contemporary women artists thanks to a gift from gallerist Martha Macks-Kahn, founder of Goya Contemporary / Goya-Girl Press in Baltimore, MD. The gift includes a print by Louise Bourgeois, an oil painting by Louise Fishman and a print by Kiki Smith.

Louise Bourgeois was born in Paris in 1911. She studied art at various schools there, including the Ecole du Louvre, Académie des Beaux-Arts, Académie Julian, and Atelier Fernand Léger. In 1938, she immigrated to the United States and continued her studies at the Art Students League in New York. She began as an engraver and painter, but by the 1940s she had turned her attention to sculptural work, for which she is now recognized as a twentieth-century leader.

Deeply symbolic, her work uses her relationship with her parents and the role sexuality played in her early family life as a vocabulary in which to understand and remake that history. The anthropomorphic shapes her pieces take—the female and male bodies are continually referenced and remade—are charged with sexuality and innocence and the interplay between the two.

In the 1950s, when Bourgeois lived with her husband and children in an apartment on 18th Street in New York City, the family had two cats: Champfleurette and Tyger. One of these pets inspired the print recently acquired by TMA: Champfleurette, The White Cat. According to Bourgeois biographer Marie-Laure Bernadac, the cat’s name was a feminization of the French writer and art critic Jules Champfleury (1821-89). He authored Les Chats, a book of essays on cats with illustrations by multiple artists, including Manet and Delacroix. 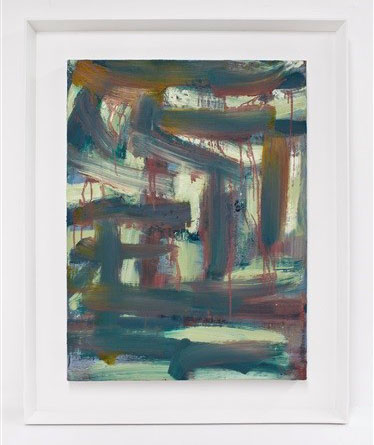 Louise Fishman‘s process-based, large-scale abstractions draw on queer, feminist and Jewish cultures. Born in Philadelphia in 1939, she studyied at the Philadelphia College of Art and at the Pennsylvania Academy of the Fine Arts before earning a BFA and BS from the Tyler School of Art. In 1965 she received her MFA from the University of Illinois at Urbana-Champaign.

Fishman moved to New York, hoping to enter the world of hard-edge Abstract Expressionism, but found the male-dominated scene unwelcoming. During the late 1960s, as she became more active in the feminist movement, she temporarily pushed painting aside in favor of textile works, which were more in line with those of her feminist peers.

Fishman returned to painting in the early 1970s with the “Angry Women” paintings, in which she paired the names of female artists (including herself) with the word “angry.” Over three decades she incorporated scraps and wood and cardboard, created gestural works with trowels and scrapers, worked with beeswax mixed with cremains from Auschwitz, created grids with the painter Agnes Martin in New Mexico, and incorporated Chinese characters into her works. Her work of the past two decades, with its explosive scrapes and smears, is considered by many to be her best.

Kiki Smith, Etc., Etc., 1999, lithograph in 6 colors and intaglio in 2 colors with applique on Sekishu Torinoko Gampi, Masa, and Hahnemuhle Copperplate paper, 35/48. Collection of the Tucson Museum of Art. Gift of Martha Macks-Kahn. 2021.22.3

Kiki Smith was born in 1954 in West Germany. Her family moved to the United States when she was an infant. She attended Hartford Art School in Connecticut before moving to New York City in 1976 to join Collaborative Projects (Colab), an artist collective. She has been known since the 1980s for her multidisciplinary work that explores embodiment and the natural world. She uses a broad variety of materials to continuously expand and evolve a body of work that includes sculpture, printmaking, photography, drawing and textiles. She is an adjunct professor at NYU and Columbia University.

Smith has been the subject of numerous solo exhibitions worldwide including over 25 museum exhibitions. Her work has been featured at five Venice Biennales, including the 2017 edition. She is a member of the American Academy of Arts and Letters and the American Academy of Arts and Sciences, and in 2017 was awarded the title of Honorary Royal Academician by the Royal Academy of Arts, London. Previously, Smith was recognized in 2006 by TIME Magazine as one of the “TIME 100: The People Who Shape Our World.” Other awards include the Skowhegan Medal for Sculpture in 2000; the 2009 Edward MacDowell Medal; the 2010 Nelson A. Rockefeller Award, Purchase College School of the Arts; the 2013 U.S. Department of State Medal of Arts, conferred by Hillary Clinton; and the 2016 Lifetime Achievement Award from the International Sculpture Center.

The Neon Works of Patrick Martinez